One of the biggest and most well-known motels in the Czech Republic.

ROHLENKA MOTEL AUSTERLITZ ranks among the top facilities of this kind in both the Czech Republic and in Europe due to its location, tradition and its complete quality range of services, all at a very reasonable price.

Rohlenka Motel is situated at kilometre point 207.5 of the D1 motorway from Brno to Olomouc, and is accessible from each direction, both from Brno and from Olomouc. It was built 25 years ago on the spot of a former roadhouse.

Nearby Rohlenka, below Santon hill, the historic Battle of the Three Emperors took place in 1805 AUSTERLTZ. www.austerlitz.org

Over the course of Rohlenka´s existence, hundreds of thousands of satisfied visitors have passed through its gate where they have tasted not only the renowned Moravian cuisine, but also experienced the traditional Moravian kind-heartedness and helpfulness of its staff. The Motel is open 24 hours a day, offering road travellers a number of appealing locales: Napoleon Restaurant, the Fast Self-Service Diner, the Coffee Bar, the Snack Bar, the Tearoom and an Exchange Office. Children will enjoy playing on the playground which includes a jungle gym.

The motel is handicapped-accessible, has modern large bathroom with showers, nursing facilities and a toilet for the handicapped.

The rooms of the motel have comfortable beds for 40 visitors. All the rooms have their own shower, toilet. Reception is also provided of course. The two large car parks are monitored by CCTV.

The premises of the motorway include a petrol station (ARAL company), a small garage and McDonalds restaurant.

In our motel is a fast WLAN (WIFI) Internet connection available throughout the restaurant premises. This service is provided by T-mobile.

We look forward to your visit.

You can taste here…

There it is over 35 slot machines and a giant roulette. Of course it is perfectly equipped bar with professional staff.

Come and try your luck. We look forward to your visit. 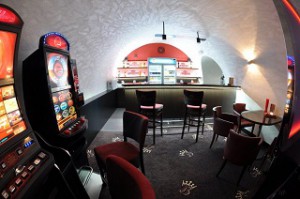 ACCOMMODATION newly from 450 CZK with breakfast and safe parking!